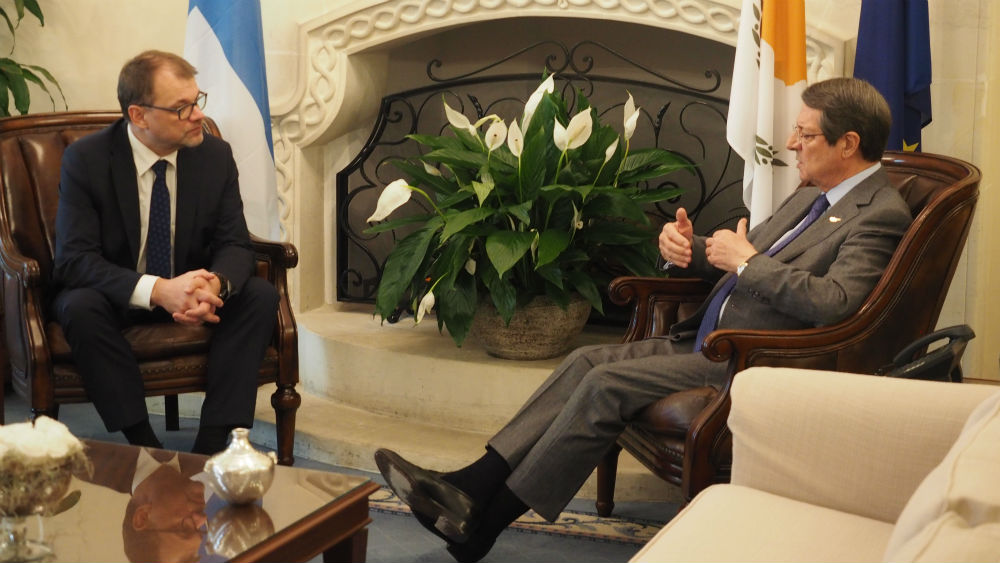 Prime Minister Juha Sipilä and President of Cyprus Nikos Anastasiádis met in Nicosia in Cyprus. The central topics of their discussions were climate change, other topical questions that will be on the agenda of Finland’s forthcoming Presidency of the Council of the European Union, and attempts to unify the island of Cyprus. The leaders also decided to further strengthen their bilateral relations and agreed about a roadmap for closer cooperation in different sectors.

"President Anastasiádis and I share the view that climate change is one of the biggest challenges for Europe. The impacts of global warming are all too clear also in Cyprus. Finnish expertise in climate change matters is appreciated and we agreed about closer cooperation in this sector. The countries’ ongoing cooperation related to efforts to combat climate change will be further strengthened. For example, the EU will provide funding for the establishment of a hub for monitoring climate change in eastern Mediterranean in Cyprus, and it will work together with the University of Helsinki," Prime Minister Sipilä says.

Like Finland, Cyprus promotes the development of the EU's defence cooperation and supports preparedness for hybrid threats. Cyprus is the latest country to have joined the European Centre of Excellence for Countering Hybrid Threats (Hybrid CoE).

Prime Minister Sipilä and President Anastasiádis discussed also other topical matters that will be on the agenda during Finland's EU Presidency, such as the EU's next multiannual financial framework (MFF) and migration. Promoting agriculture and cohesion policy are also in both countries' interests. It would be important for Cyprus that the root causes of migration be addressed more effectively and that the EU managed to agree on a comprehensive migration policy. In relation to its population, Cyprus is the biggest recipients of asylum seekers from other EU countries.

In addition, Prime Minister Sipilä and President Anastasiádis discussed the relation between the EU and Turkey and the Cyprus issue.

"President Anastasiádis told about the attempt to resume the negotiations on the reunification of Cyprus. The matter was very topical, because he had met UN Secretary-General’s special envoy on the Cyprus dispute Jane Holl Lute recently," Prime Minister Sipilä said.

The UN-sponsored talks between Greek and Turkish Cypriots broke down in summer 2017. Finland continues to support the proposal for a federal solution.

"Furthermore, Finland and Cyprus have a peace mediation project of their own, which is building bridges between Greek and Turkish Cypriots by means of supporting startups engaged in cross-border cooperation," Prime Minister Sipilä said.