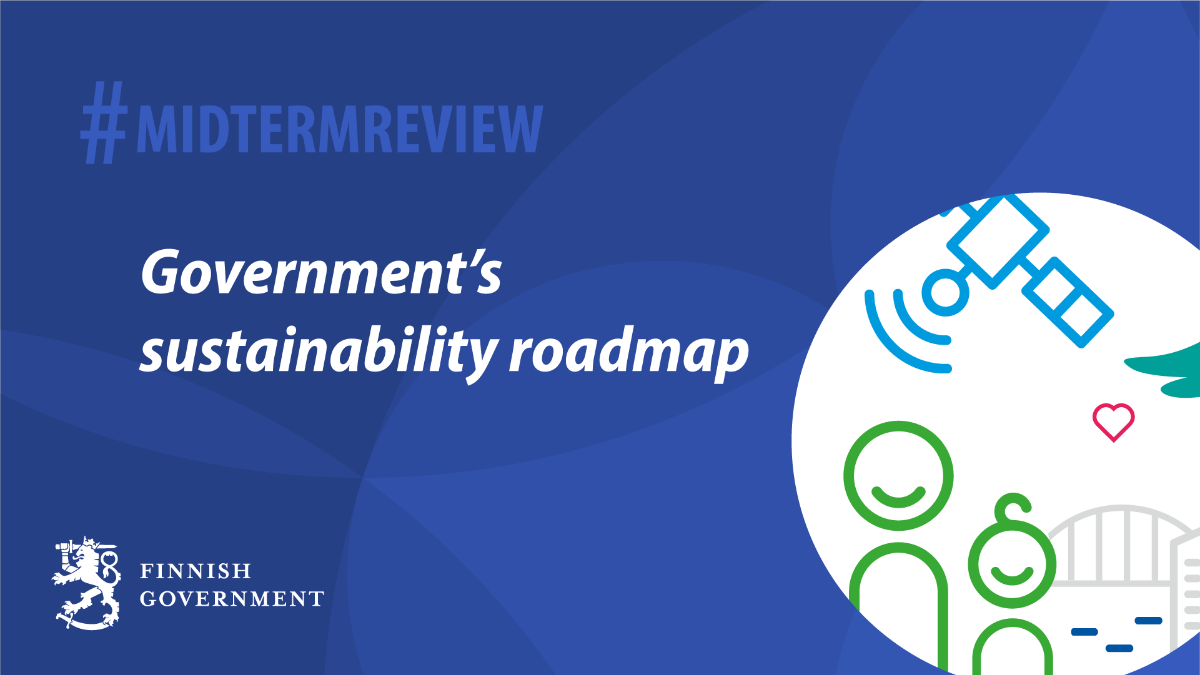 Development is sustainable when the objectives of ecological, social and economic sustainability are fulfilled and when they support one another. In its mid-term policy review, the Government decided to clarify its goals for these three elements of sustainability and to highlight the interdependence between them. The work will be completed before the government spending limits discussion in 2022.

The impact of the roadmap’s measures on public finances will be taken into account during the implementation. The measures will be implemented as part of the General Government Fiscal Plan within the framework of central government spending limits.

The Government’s goal is to reduce poverty and inequality, decrease income disparities and support the rule of law in Finland and globally, and to promote the economy of wellbeing and the conditions for a good life at all stages of people’s lives.

The roadmap acknowledges the challenges that the coronavirus pandemic has posed to social sustainability. The pandemic has increased inequality, because it has often been the same people who are affected by many of its adverse social impacts. In particular, the wellbeing of children, young people and families has suffered. The employment rate has fallen and unemployment has grown during the pandemic. Pandemic-related restrictions have also made it difficult for companies to operate. As a result of the restrictions, many social services have been on hold. With a growing and lengthening backlog in these services, there is a risk that people’s lives will become significantly more difficult. With regard to Finland’s global responsibility, the pandemic has brought particular challenges to the ability to meet sustainable development goals internationally.

The Government’s goal for 2030 is that Finland will be the most stable society in the world, where fundamental and human rights, democracy and the security of citizens are at a high level.

The roadmap’s social sustainability goals for 2030 are:

Finland’s general government finances have been in deficit since 2009. The growth in central government debt has been accelerated by the pandemic, deepening the general government deficit, although the debt has remained lower than the EU average throughout the crisis. The high level and rapid growth of central government guarantee liabilities has also increased the risks within general government finances. General government finances have been adversely affected by the ageing of the population and by the slackening growth in the economy. Finland’s gross domestic product (GDP) per capita has fallen behind that of the other Nordic countries. The employment rate is also significantly below that of the other Nordic countries, despite a favourable pre-pandemic trend that remained far better than anticipated during the crisis. Well-balanced fiscal policy has mitigated the depth of the economic crisis during the pandemic and has improved the conditions for rapid post-pandemic recovery.

Economic growth in Finland is primarily generated by productivity growth, and the most important factors for productivity growth are competence and innovation. A successfully operating welfare state, effective infrastructure, education, training, research and close integration with the world economy form the foundation for Finland’s economic success and growth.

The Government’s aim is to achieve a reversal in the upward trend in the general government debt-to-GDP ratio in the mid-2020s. Stabilising the debt ratio will require the strengthening of general government finances. Measures to safeguard the long-term sustainability of government finances must also continue beyond the current parliamentary term. The measures aim to increase employment and reduce unemployment, and to improve the conditions for economic growth by strengthening the competitiveness of Finnish production, increasing work-based immigration and strengthening skill levels and continuous learning. The Government will also promote economic sustainability through measures aiming to strengthen the productivity and cost-effectiveness of public administration and by implementing the healthcare and social welfare reform.

The roadmap’s economic sustainability goals for 2030 are:

The aim of ecological sustainability is to ensure the wellbeing of nature and the environment, the functioning of ecosystems and their regeneration capacity now and in the future. Climate change, loss of biodiversity and overconsumption of natural resources are among the greatest challenges humankind is facing, and they have major impacts on the achievement of ecological sustainability.

In Finland, progress towards combating climate change is encouraging, but further actions are needed. Since 2000, the overall trend in biodiversity has been negative. The use of natural resources has major impacts on biodiversity. According to Statistics Finland, the absolute use of natural resources in Finland has more than doubled from the level in 1975. Finland’s domestic material consumption per capita is the highest in Europe.

The roadmap’s ecological sustainability goals for 2030 are: