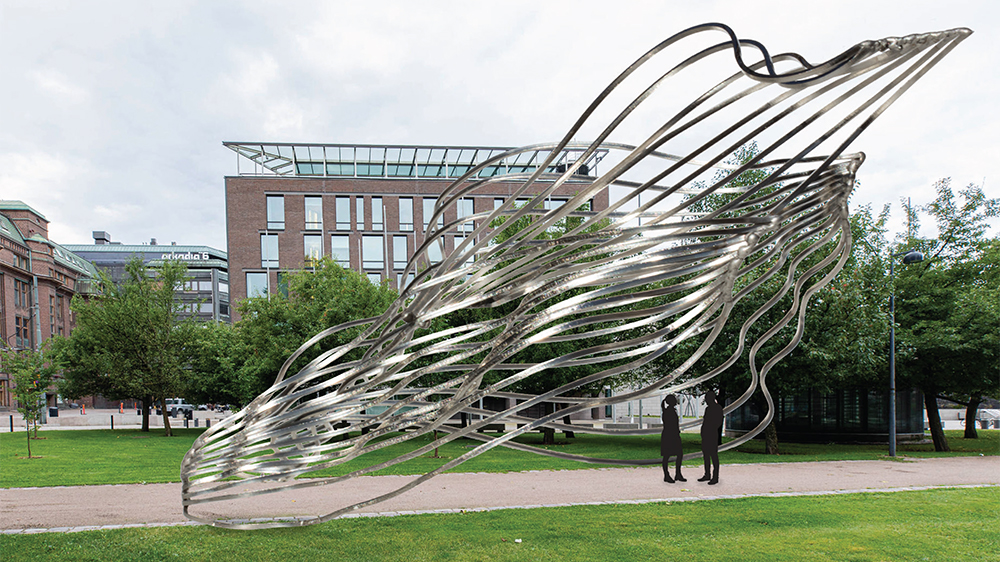 The first prize in the design competition for a memorial honouring President Mauno Koivisto has been awarded to Kirsi Kaulanen’s proposal Välittäjä (The Mediator). The competition was of an artistically high standard, with 110 entries received. Prizes were awarded to three entries in the competition, while three received commendation awards.

The awards committee sought to avoid general value judgements with respect to various artistic trends, styles, or modes of artistic expression, and accordingly decided to commend a wide variety of competition entries.

The first prize is valued at EUR 20,000. The committee describes the winning proposal as follows:

“This proposed monument will stand on both sides of a pathway through Little Parliament Park. Its polished stainless steel material will incorporate the reflection of onlookers and of the surroundings. The work accordingly places the viewer between two worldviews, reflecting the geographical position of Finland between East and West, and the role of President Mauno Koivisto as a builder of cooperation.

The Mediator brings a novel and lighter perspective to traditional presidential monuments. As a spatial and interactive work, it reflects current contemporary art, bringing an interesting new contribution to the field of public art and the cityscape. The work will also be unique by international standards.”

The memorial to former President Mauno Koivisto will be created based on the proposal that won first prize. The goal is for the memorial to be completed and erected in the park outside the Little Parliament by 25 November 2023, when 100 years will have passed since the birth of former president Koivisto.

The second prize, valued at EUR 15,000, was awarded to Matti Vesanen’s proposal Hitaalla tiellä (On the Slow Road).

“This work uses four elements to command the space of the park: a statue depicting a walking President Mauno Koivisto, a bronze gate, a granite pathway and a circular fountain. It provides a combination of traditional sculpture and more conceptual spatial art that works well in the context of Little Parliament Park,” the awards committee said.

The third prize (EUR 10,000) was awarded to Pauno Pohjolainen’s proposal Sillanrakentaja (The Bridgemaker).

Commendation awards (EUR 3,333) were given to the following proposals: Considerations (Markus Kähre), Words (Nestori Syrjälä) and A Dockworker in Thought (Anssi Pulkkinen).

Images and miniature models of the six award-winning works will be on display at the Helsinki Central Library Oodi on 1–15 September. All of the competition entries can also be viewed in a virtual exhibition online.

An official memorial has been created to commemorate all deceased former presidents of the Republic of Finland.The monuments are located in Helsinki and have been donated to the City of Helsinki upon completion. The design competition for President Koivisto’s memorial continues this tradition.

Article updated on 1 September at 14:30:  An official memorial has been created to commemorate all deceased former presidents of the Republic of Finland, not all former presidents, as was mentioned in the article earlier.