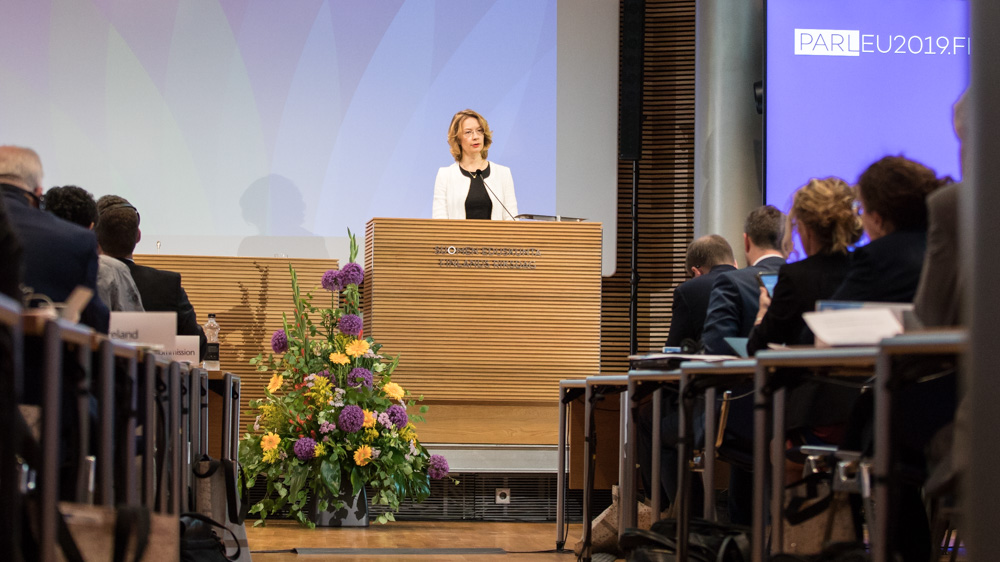 First of all let me warmly welcome you to Finland and to Helsinki. I am proud to see the COSAC meeting in my home country. In my eight years as a member of the Grand Committee of the Finnish Parliament I have come to appreciate and value the cooperation that the Parliaments of the European Member States have.

The Finnish presidency of the Council is taking place in an important juncture. The new parliamentary term brings with it not just new people but new issues and new political priorities.

The European elections of this May were an interesting turning point. The turnout in the elections was the highest in 20 years. Combined with the record trust shown by the citizens towards the EU – across Member States – it clearly shows that people place value in the Union.

People want that the EU is operating well and that it provides benefits to the everyday life. It may not be always easy to see, but the European cooperation contributes to the peace and prosperity we have enjoyed in Europe over the last 75 years.

This is where the Finnish presidency comes in. Our approach is a combination of Nordic cool-headedness and a passion for Europe. We don’t necessary believe in a lot of pomp and circumstance, but are willing to work in a pragmatic manner.

But for pragmatic way of working to succeed, we need to respect our common rules and values. This is why the Finnish presidency has put rule of law to the top of our agenda.

The rule of law is one of the common values upon which the European Union is founded and embraced by all Member States. It is enshrined as such in Article 2 of the Treaty on European Union. The rule of law is essential for the functioning of the EU as a whole, for example with regard to the Internal Market, cooperation in the area of Justice and Home Affairs, and ensuring that national judges who are also EU judges can fulfil their role. The judgment of the European Court of Justice in June 24th is clear stating that the Member States are required to comply with their obligations under EU law

Today an American historian Robert Kagan is often quoted about the perils of today’s world. He describes the rules-based world order as a garden needing constant care and protection. The natural order of things, he writes, is of violence and disorder. It is the order of jungle, not garden. If we are not vigilant, the jungle grows back.

The European Union is a union of laws and rules. It is its strength, enabling a functioning co-operation between member states and laying a solid foundation with our relationship with outside world. The rule of law a positive factor, and should be seen that way. Therefore, the rule of law is in the front and centre in the Finnish Presidency. We are committed to develop the rule of law instruments: rule of law dialog and the mechanism within Multiannual Financial Framework, MFF.

The priorities for Finland’s Presidency also include making the EU more competitive and socially inclusive, strengthening the EU’s position as a global leader in climate action and protecting the security of citizens comprehensively.

A topic of great importance to us is developing EU’s thinking towards the North of our globe. Climate change is changing how arctic areas come into play and the EU should be ready. EU needs a comprehensive arctic strategy that can show what the northern regions can mean and the ways we can best protect the delicate environment of the arctic.

Finland has been a pioneer of EU’s northern policy by launching the Northern Dimension in 1999. Now it is high time to put northern issues back on the agenda. This is an important part of making the EU a more prominent global actor and also safeguarding the rules-based international order. Let us make the Arctic an example of how the world can work together.

It often happens that the practical implications of EU law are felt only some time afterwards the trilogues have concluded and the bills signed. This is why national parliaments and national politicians need to be aware and take great care of EU affairs.

Sometimes the sheer volume of EU business can be overwhelming. Combined with all the normal duties of the MPs, taking a keen interest in EU affairs can be a tall order.

This is where you come in. You are the prism through which your colleagues can see important developments in the EU. You are the ones who will need to stir excitement over mundane EU policies.

The Finnish presidency is committed to revisit and revise the Council’s working methods and practices as part of the implementation of the Strategic Agenda. I wish to invite you to participate in this work and develop the good cooperation of the national parliaments and the Council of the European Union.

The European Union is enormously important to us Finns - even though we might not always say it out loud. We rarely do say anything out loud for that matter. Therefore, I find it natural to use our musical tradition to describe the workings of the Union. Finland is a country of music and the proud home of Jean Sibelius, Kaija Saariaho and many other great composers and conductors. Moreover: my father is a violinist and he knows that a good conductor can make the orchestra work together. In this presidency, it should be our role to try to be the conductor of this 27 or 28-member orchestra. We don’t write the music, but we can make everyone play together.

We should be very careful, that EU decision-making doesn’t turn in to a cacophony of different regional or other blocks. There is a risk that same countries find each other on opposite sides of the aisle in question after question. Our EU is not a union of regional alliances. It’s a transnational cooperation of peoples, who face similar challenges: from warming climate to youth unemployment.

We want to foster the unity of the union and all voices need to be heard. Only united can we be strong.

The Finnish presidency is committed to a pragmatic approach towards developing our common Union. We remain at your service.