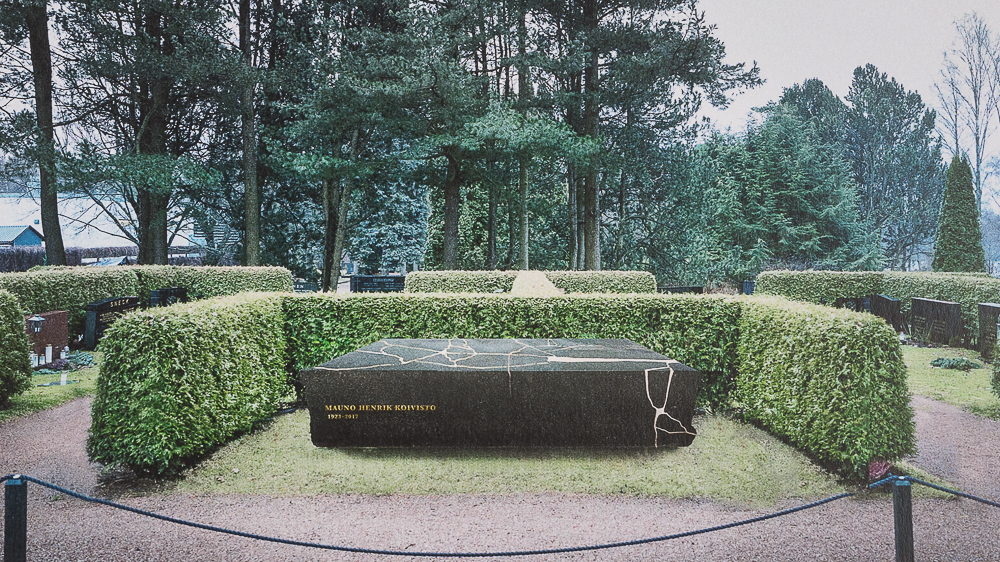 The winner of the design competition for the grave memorial for former President of the Republic of Finland Mauno Koivisto has been declared. The winning design is entitled ‘Kartta’ and was designed by visual artist and photographer Perttu Saksa. The runner up is a sculpture by sculptor Matti Nurminen entitled ‘Tarttis tehrä jotain’, and sculptor Bjarne Lönnroos’s entry ‘Jää sulaa’ came in third place.

The winning design receives a prize of EUR 10,000, the runner up EUR 5,000 and the one in third place EUR 3,000. The judging committee also decided to award EUR 1,000 as a commendation for sculptor Pertti Mäkinen’s design ‘Heijastus’. The prize money amounts to EUR 1,000.

The judging committee consisted of the members of former president Koivisto’s grave memorial committee. The Chair of the judging committee, Permanent Under-Secretary of State Timo Lankinen, wishes to thank all contestants and says the standard of the competition was very high.

‘The contestants’ entries reflect former President Koivisto’s career as a state leader, but many of the works also made reference to his pastimes and to his home town. The evaluated design entries illustrate great diversity in the proposals for a grave memorial,’ observes Lankinen.

Description of the winning entries

The judging committee describes ‘Kartta’, the winning entry, as follows:

‘This entry consists of pieces held together by gilding. It is a magnificent ensemble. While the proposal can be seen to meld with ceramics that emphasises humility and dignity or fragmented world politics, the design is first and foremost an independent, multivocal tribute to unity. Erosion has ground down the stone into separate pieces, while the reconstructed arrangement is not only more humane but also much more than the original perfection. The size and dimensions of the proposal are positioned with style on the grave site, and its dual and natural shape with plasticity circumvents excessive simplicity.

The judging committee describes the ‘Tarttis tehrä jotain’ entry, which came in second place, as follows:

‘The design, sculptured from black diabase, rests or a lightly polished stone base, projecting an image of both power and sensuousness. Its shape is well-rounded. The tautness between the winding and rough-hewn rock speaks volumes. The forepart of the monument is craggy while the top surface is smooth. The coarse surface reflects former President Mauno Koivisto’s war years on the front line. The top is smooth so the names can be engraved there. The memorial provides a base and backdrop for flower arrangements. The space between the monument and the surrounding hedges is adequately spacious.

The proposal that won third place in the competition, ‘Jää sulaa’, is described by the judging committee as follows:

This memorial, sculptured from red granite of a light shade, takes account of its milieu and stands out from the surrounding memorials in the graveyard. It is not only vivid and interesting in shape but also powerfully dignified. The concept images illustrate how the memorial breathes beautifully with each season. The symbolism in the memorial refers to the end of the cold war and Mauno Koivisto’s 12 years as President of the Republic of Finland. The number 12 is reiterated in the crags in the upper part of the sculpture. The contrast between the coarse surface of the monument and the glowingly smooth surface of its pedestal highlight the materials used. The overall design works well.

In addition, the judging committee describes ‘Heijastus’, the design that was awarded a commendation, as follows:

This sculpture is an ensemble incorporating a polished horizontal platform with a wedge-shaped stone sculpture placed vertically on the platform. The prow-shaped stone makes reference to the President of the Republic as a figurehead of the nation while also using the vessel-shaped structure on the sea-like reflecting horizontal surface to make reference to the last journey of the former president. If you bend down over the memorial, you will see your face reflected between Heaven and Earth. The sculpture is just the right size for the grave site and the contrast between the elements works well.

Entries on display at the House of the Estates and online

The top 17 entries are on display in Helsinki at the House of the Estates, Snellmaninkatu 9-11. The exhibition is open to the public from 10 April to 20 April, weekdays between 9.00 and 16.15. Please be prepared to show an ID card upon arrival at the House of Estates. There are no facilities for storing bags or items of clothing, so please make sure not to bring any big bags or backpacks. For persons with reduced mobility, access to the exhibition at the House of Estates takes place from right side of the building on Kirkkokatu 11-13.

All competition entries are on display in an online exhibition on the Prime Minister’s Office webpages at vnk.fi/muistomerkkikilpailu. The top 17 entries have also been described by the judging committee on the webpages.

The memorial will be unveiled on 25 November, the anniversary of the birth of former president Koivisto

At the start of January, the Prime Minister’s Office announced a design competition for the design of a grave memorial for former President of the Republic of Finland Mauno Koivisto.

A total of 138 proposals were received by the closing date. The aim is to have the grave memorial ready and in place at the Hietaniemi Cemetery by 25 November, the anniversary of the birth of Koivisto.

Online exhibition of the competition entries