Prime Minister’s presentation speech at the referral debate in Parliament 26.3. 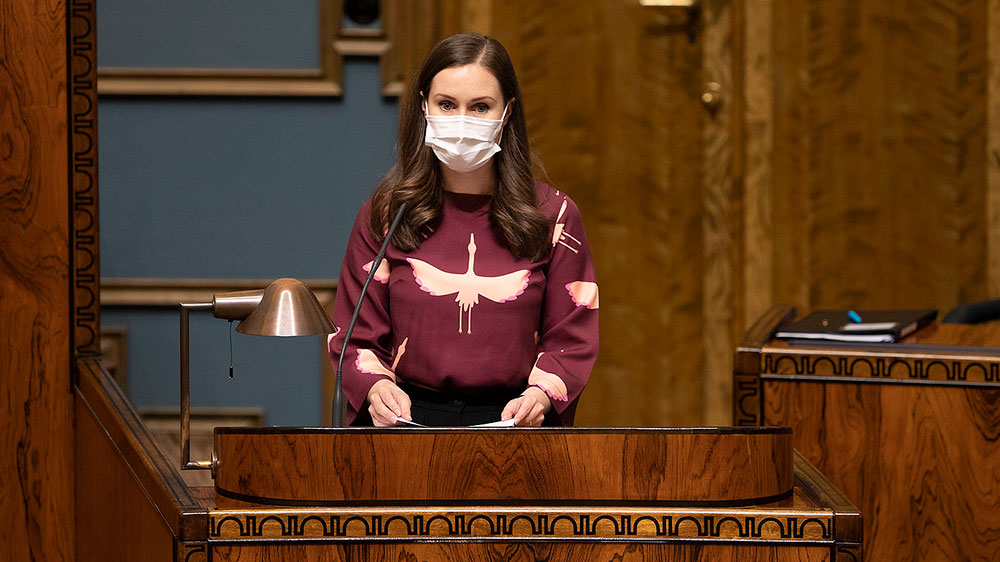 Prime Minister’s presentation speech at the referral debate in Parliament on the government proposal to Parliament for an act on the temporary restriction of freedom of movement and close contacts. Changes possible during the speech.

At a very early stage in spring 2020, Finland imposed extensive restrictions on the activities of society due to the COVID-19 pandemic, and we have been relatively successful in preventing the spread of the virus because of these timely and sufficient restrictive measures. Special thanks are due to our citizens who, as a rule, have followed the restrictions well. The measures have aimed to prevent the spread of COVID-19, to safeguard the capacity of the healthcare system and to protect people, especially those who are most at risk. The set of restrictive measures has been based on recommendations and guidelines from the authorities, on legislation for normal conditions and, ultimately, on emergency powers legislation and temporary legislation adopted under section 23 of the Constitution.

In the beginning of this year, it has once again been necessary to tighten the restrictions, as new virus strains have made it more difficult to manage the epidemic situation in Finland. This has also been the case in many other European countries. The number and incidence of outbreaks has risen very rapidly in Finland since the beginning of February 2021, even though restrictive measures have been widely in effect. The incidence of cases has almost tripled from the figures we saw at the turn of the year. In many parts of Finland, we have been successful in managing the epidemic using a test, trace, isolate and treat approach. However, the rapid increase in the number of cases in some parts of the country has placed severe strain on our contact tracing capacity. This is making it even more difficult to control the epidemic.

One reason for the acceleration in the epidemic is the emergence of new virus variants. According to research data, the UK variant of the virus in particular spreads 30–50 per cent faster than earlier virus strains and is more likely to lead to hospitalisation, intensive care and fatalities. Although the rate of increase in the number of infections has slightly stabilised over the past week, the restrictive measures have not succeeded in reversing the trend in case numbers, at least for the time being, to a clear decline. The carrying capacity of our healthcare system is already being put to the test.

The situation in the Hospital District of Helsinki and Uusimaa and the Hospital District of Southwest Finland is now particularly difficult. With the increase in the incidence of the disease, the need for medical care is also growing and there is an estimated 50–75 per cent probability that we will exceed the carrying capacity of specialised medical care within the next four weeks.

According to an assessment by the National Institute for Health and Welfare and the Ministry of Social Affairs and Health, restrictions on movement are necessary in order to manage the epidemic and safeguard the carrying capacity of our healthcare system. This is why yesterday, on 25 March, the Government submitted to Parliament a proposal for an act that would temporarily restrict freedom of movement and close contacts.

It is very difficult to assess when will be the right time to submit the legislation at hand to Parliament. People’s fundamental rights can only be restricted if this is necessary and proportionate in view of the situation and if the measures are estimated to be sufficiently effective. The Government must also take into account that it takes Parliament time to process legislation and, therefore, we must strive to be sufficiently proactive with regard to the future situation. There will always be a delay between the development of the epidemic and when it is observed in the healthcare system.

The Government has based its proposal on an assessment by the Finnish Institute for Health and Welfare and the Ministry of Social Affairs and Health concerning the need for the legislation. If we did not proceed in this manner, we would be neglecting our duty to safeguard our citizens’ constitutional right to life.

The government proposal would place temporary restrictions on the freedom of movement guaranteed by the Constitution in order to protect the population from the spread of the COVID-19 epidemic. In line with the proposal, people would be prohibited from moving and staying outside of their home or similar place of residence in those municipalities where this is necessary in order to prevent the widespread outbreak of a serious infectious disease, the effect of which is comparable to a major disaster. The restriction applies to leaving the enclosed or demarcated yard at the place of residence.

The proposal further states that in areas where the restrictions on movement are in force, all people born in 2007 or before must wear a face mask or respirator covering the mouth and nose while in indoor spaces and in means of transport with persons other than those belonging to the same household. However, it is not necessary to wear a mask or respiratory protective equipment if this cannot be done for health reasons.

The proposal is being submitted as a provisional exception to fundamental rights in situations of emergency in accordance with section 23 of the Constitution. The act is set to enter into force as soon as possible and it will remain in force until 14 May 2021.

The legislative proposal includes certain exceptions to the restrictions on movement. Everyone always has the right to return to their place of residence. People may also enter, move around in and leave the areas where the restrictions are in force if this is necessary for the following essential reasons:
1) to purchase food and drink, medicines, fuel or other items of similar importance for everyday life;
2) to handle banking matters and to collect and send mail and other items;
3) to access healthcare or social welfare services or to carry out transactions with public authorities if this must be done in person;
4) to perform duties related to a post or employment relationship or to pursue trade or business activities;
5) to participate in early childhood education and care as laid down in Act on Early Childhood Education and Care, in education or activities as laid down in the Basic Education Act or the Act on the European School of Helsinki or in upper secondary general education, vocational training or higher education, or to take an entrance exam, aptitude test, matriculation examination test or other similar test required for such education;
6) to carry out tasks related to a public position of trust, to participate in a meeting of a private corporation or foundation, to perform the duties of a member of an institution or to represent a corporation or foundation in situations where deferring this participation, performance or representation could cause damage to the corporation or foundation, a shareholder or member, or another person;
7) to perform military service or to meet another statutory obligation;
8) in connection with the need for care, risk of death, or the death or funeral of a family member or other close person, to provide assistance and support to a child or to fulfil the right of access to a child, to provide assistance and support to a person with a disability, or for reasons related to an established relationship or other comparable reasons;
9) to meet privately for spiritual reasons with a representative of a religious community;
10) to maintain or service a building, property or vehicle owned or controlled by the person, or to move to another place of residence;
11) to care for an animal for which the person is responsible;
12) to travel to a leisure dwelling owned or in permanent possession or use by the person or by another person belonging to the same household;
13) to perform rescue services as referred to in the Rescue Act and other acts.

Children born in 2008 and later are also allowed to do outdoor activities and play outside with other children. Everyone is allowed to go outside for recreation, exercise or to walk their pets with persons belonging to the same household or at most two other persons, provided that they are able to maintain a safe distance from others and remain in the area where the restrictions are in force. Movement would also be permitted for the purpose of leaving or entering the country.

Separate provisions on the municipalities or regions in which the restrictions would be in force would be laid down by government decree. The decree may be issued for a fixed period of no more than 21 days and will be valid only for the necessary period. The validity of the decree may be extended for a maximum of 21 days at a time. The decision on which areas will be subject to the restrictions must take into account the incidence of infections and trends in the development of the epidemic in the area, success in identifying the sources of infections in the area, the regional forecast of the future need for hospitalisation and intensive care, the population density of the municipality and its status as part of a commuting and business area. The police will be responsible for monitoring compliance with the act. The act will not apply in the autonomous region of Åland.

Certain targeted measures have been proposed as alternatives to a general restriction on movement and close contacts. According to expert estimates, targeted restrictions alone are not sufficient and cannot be used as a substitute for the restrictions on movement, as individual measures will not achieve the level of effectiveness needed to deal with the current situation. In the areas most severely affected by the epidemic, we need sufficiently extensive restrictions that will significantly reduce the number of contacts between people. The restrictions on movement and close contacts aim to do precisely this. The Finnish Institute for Health and Welfare estimates that the restrictions on movement will reduce the number of contacts by about 25 per cent in the areas where they are in force. The objective of the act is to prevent contacts between people and limit the spread of the virus so that we can ensure the carrying capacity of the healthcare system and safeguard citizens’ right to life.