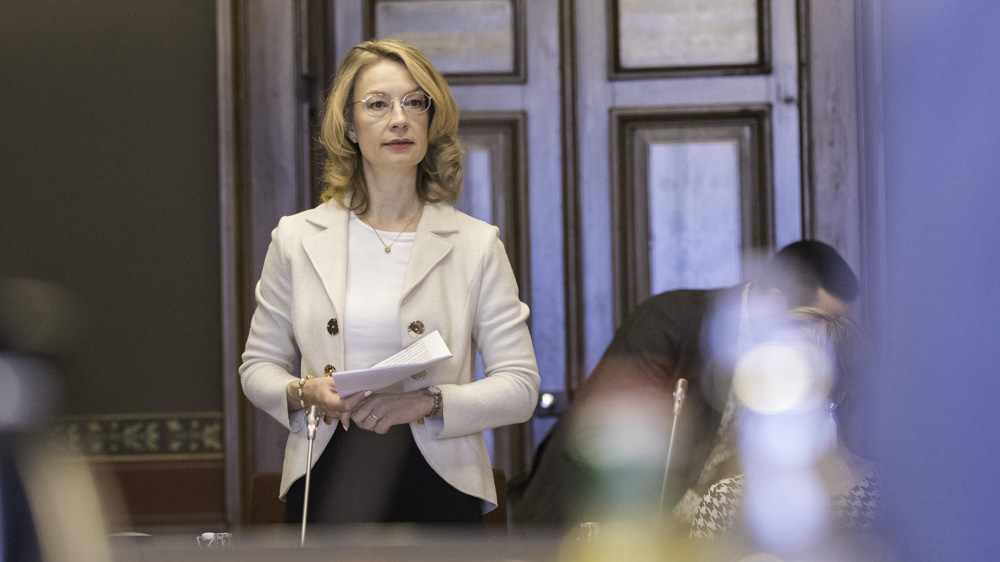 Ladies and Gentlemen, Your Excellencies!

One of the priorities of Finland’s Presidency of the Council of the EU is to promote the implementation of fundamental rights in various ways. That concurs with the programme of Ms Marin’s government that mentions human rights more than just once. Promoting human rights is one of the cornerstones of foreign policy. And human rights are the foundation of the rule of law.

Until recently the human rights protection in Finland and in Europe laid emphasis on social, civil, and cultural rights. It was all about guaranteeing gainful employment, adequate social security and good quality education. It is unfortunate that nowadays we have grave concerns whether we can guarantee the very basic civil and political rights within Europe. Are we safeguarding human beings’ inherent right to life, when hate speech and hate deeds threaten various groups within Europe? Moreover, does foreign policy of European Union promote these fundamental rights across the globe?

Finnish and European human rights policies are based on providing equal protection to all regardless of ethnic origin or religious affiliation. All human beings are equal. All human rights violations merit our concern. We are concerned whether Muslims’ human rights are guaranteed in some Asian countries, and, indeed whether Muslims face discrimination or are targeted with hate speech within Europe.

However, I do think that special emphasis on the menace of Antisemitism is warranted.

For Europe the Antisemitism is the oldest hate or the original sin of our continent’s history. For centuries it was all too common to define European Christianity in terms of Antisemitism, of not being Jewish. And as Europe modernised it did not leave Antisemitism behind. To the contrary: the nineteenth and twentieth century gave rise to even more virulent form of Antisemitism. The distorted and un-scientific interpretation of biology created racial theories that left no place for Jewish people. Their part was to perish, to disappear from the face of Earth. In the cruel history of racism this was the worst of the worst, this was the heart of darkness.

Sadly, the menace of Antisemitism is not just part of history. Kantor Center of the Tel Aviv University reports that the attacks against Jewish people were once again rising in 2018. The biggest numbers of attacks were in the United States and in the UK, and the number of human lives lost worldwide rose to a thirteen.

According to European Agency for Fundamental Rights more than 80% of European Jews aged 16 to 34 strongly identify with being Jewish, and an equally high number of respondents believe anti-Semitism is a growing problem in their countries. It is the biggest problem. Even here in Finland, in country which does not have the worst history of Anti-Semitism, it is alarming that a synagogue needs protection 24  – 7.

For obvious historical reasons I see the Antisemitism of the extreme right as a greatest threat to Jewish people in Europe. The far right is potent utilizer of weaponized hate speech and a potential source of domestic terrorism. They once again use the age-old conspiracy theory that Western societies are losing their character, and Western nations their ethnic composition, because of a global Jewish conspiracy, bent on unleashing uncontrolled immigration from Islamic countries upon the West.

However, Antisemitism is not the sole property of the far right. One should not avoid facing the fact that there is other source of Antisemitism that is shrouded under the veil of criticism against the state of Israel and presents itself as Anti-Zionism.

Let us not be fooled by the coded language of the Anti-Semites. When the say Zionists, they mean Jews. It is the very same coded hate speech as Anti-Semites talk about “rootless cosmopolitans” or “Soros henchmen”. All these coded words mean the same, they mean “Jews”.

I quote the speech given by secretary general of the United Nations Antonio Guterres in September last year: “In more recent times, antisemitism is expressing itself in attempts to delegitimize the right of Israel to exist, including calls for its destruction, using the pretext of the situation in the Middle East to target Jews and Jewish symbols.”

We have witnessed a worrisome trend of racist hate speech becoming normalised. Politicians and other public figures use expressions that were unheard of just a few years ago. There is every reason to be afraid that a normalisation of Antisemitic speech may be on the way. We must not to get caught in the catchy populist voices which divide our societies in good and bad citizens, us and them, friends and enemies. This undermines a democratic and open political debate; radicalization and extremism gain ground. We all need to step up our efforts in preventing intolerance, racism and xenophobia. Weaponized hate speech is a challenge no society can afford to leave unchecked.

Hate speech is a central problem of internal security for all contemporary Western societies. Modern media environment offers quite unprecedented ways to reach people by messages of hatred. Such hate speech by ordinary citizens can be distressing enough to encounter. More serious form of hate speech is weaponized hate speech: messages of hate and violence that have been purposefully turned into a tool with which to reach political aims.

The modern far right forms a loose, supranational network. Extremist actors share influencing strategies and theory, as well as themes, symbols and talking points with each other in real-time over the social media networks. Therefore, the far right tends to say the same things everywhere, regardless of country or locality.

The role of social media is and has been central in far right networking and political mobilization as well as in disseminating hate speech. In that role, the social media offers a platform for online communities of hate to form and maintain themselves, and to spread their message of mistrust, hatred and violence.

Within the broad spectrum of contemporary hate speech, Antisemitism remains a staple. While the venues through which hate speech is proliferated may be cutting-edge modern, the character of contemporary Antisemitism remains unchanged. The central lies, distortions, myths and talking points, familiar already from 19th-century, are still very much the same as they’ve always been.

The European Union is based on respect for human dignity, freedom, democracy, equality, the rule of law and respect for human rights. These values are the cornerstone of democratic societies and the very foundation of our European project. Our common value base has enabled the longest period of peace in Europe. Fortunately, younger generations have not suffered under totalitarian regimes. Yet there is now a risk that we are taking these common values and principles for granted.

Especially worrisome is the confusion surrounding the idea of free speech. The users of weaponised hate speech present themselves as defenders of free speech. They demand the criminal codes be stripped of sanctions against fomenting racial or religious hatred. Ostensibly their first target is the religion of Islam and Muslims. That alone is reprehensible. However, if European history has taught us anything it is this: no matter how the racist hatred begins, it always ends the same way, Jewish people will be victims.

Remembrance is not just remembering, remembrance is about keeping a memory alive, so as not to allow ourselves to overlook horrors that have happened in the past. If we are to fully understand the present and shape a better future, an awareness and understanding of the past is crucial.