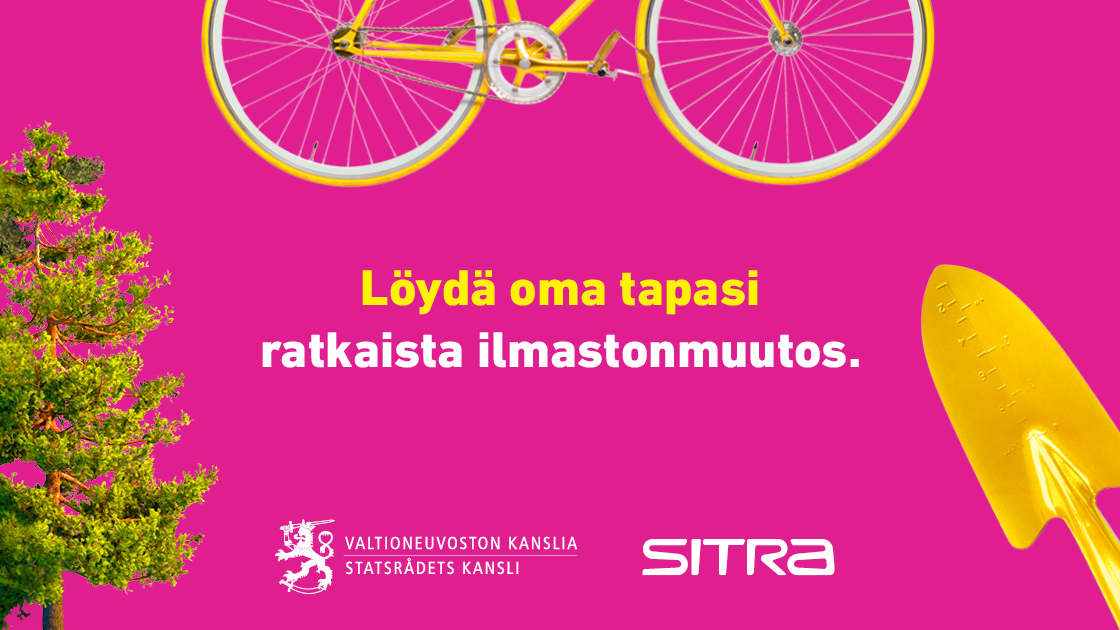 In December last year, the Prime Minister's Office, together with the Finnish Innovation Fund Sitra, launched a service in which Finns can commit themselves to reducing their carbon footprint by devising individual plans. By the beginning of last week, a total of 1,379 Finns had already made their own commitment. On average, those who have made a commitment are ready to reduce their carbon footprint by around 22%.

The commitments show that it is easier to commit oneself to small actions than to greater ones. Many people promise to repair good products, favour local food and wash only full loads of laundry. Fewer people are prepared, for example, to commit themselves to buying only recycled goods in future or spending all holidays for one year in Finland, says Project Coordinator Riina Pursiainen from the Prime Minister's Office.

“At the same time, however, it is worth remembering that even small actions count. For example today, on Black Friday, each of us can decide whether we choose to increase our carbon footprint or whether we will have a ‘Buy Nothing Day’ or start pursuing a sustainable lifestyle otherwise,” says Pursiainen.

Almost one third of those who have made a commitment promised to become vegans. A little under 20 per cent was prepared not to travel by plane for a year. On the other hand, as many as 44% of those who made this commitment reported that they had not flown during the past year anyway.

“These approximately 1,400 commitment-makers belong to an already well-informed group of people, and this shows in their choices. However, it is not necessary to be one of the pioneers in order to reduce one’s carbon footprint. Instead of becoming a complete vegan, it is possible to start having a vegetarian day once a week, for example,” Pursiainen continues.

Prime Minister Rinne: We should think about our consumer choices every day

The chair of the Finnish National Commission on Sustainable Development, Prime Minister Antti Rinne reminds that all actors in society must be engaged in the fight against climate change. The aim for the Government is to make Finland carbon neutral by 2035.

“In addition to political decisions, the actions of each and every one of us have a major impact on the speed at which we will reach Finland's climate objectives,” Rinne says.

“In my capacity as the Prime Minister, I strive to influence climate policy both in Finland and in international forums. I hope that my personal actions for reducing the carbon footprint encourage all Finns to make sustainable choices in their everyday lives,” Rinne continues.

Prime Minister Rinne's personal commitment was published in the Commitment2050 service today. In the service, users can choose the sustainable development actions that best suit them among a variety of options.

“In future, I will more often choose local food and favour Finnish freshwater fish. Furthermore, I will buy electricity produced using wind power and monitor my water consumption,” Rinne describes his own choices.

Everyone can calculate their own target for reducing carbon footprint

The Sustainable Lifestyles Commitment intended for citizens is part of the Commitment2050 service. In the service, anyone can make their own commitment in order to reduce their carbon footprint, whether the user is a company, an organisation or a private person. The carbon footprint calculator available on the website is based on the Sitra Lifestyle Test, and it has been used around 65,400 times.

The Commitment2050 service is part of the Society’s Commitment to Sustainability, which is one of Finland’s key tools for implementing the UN’s 2030 Agenda for Sustainable Development.

By the beginning of last week, a total of 1,944 operational commitments had been made in the service. They have mostly been made by companies, municipalities, schools and organisations.