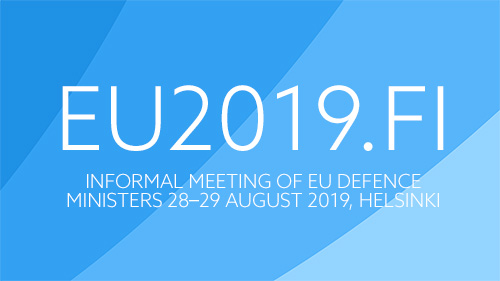 EU defence ministers will discuss new technologies and the changing world during the informal meeting of ministers of defence on 28 and 29 August. The topics of discussion include for example artificial intelligence and the effect of climate change on defence and security.

The meeting will be chaired by the High Representative of the Union for Foreign Affairs and Security Policy Federica Mogherini. Finland, which currently holds the Presidency of the Council of the European Union, is represented by Minister of Defence Antti Kaikkonen.

Artificial intelligence and digitalisation are creating fundamental changes in society. The effects also extend to defence. During its Presidency, Finland aims to stimulate discussion on the effects of AI developments and digitalisation and to encourage their exploitation in developing EU defence.

"New technologies such as artificial intelligence are changing the operating environment of defence. We need cooperation in advancing and harnessing these new technologies. By cooperating, the EU can impact the course of international developments," says Kaikkonen.

The informal meeting of ministers will start off with discussions on AI and new technologies. The defence ministers will deliberate the overall situation together with leading private sector experts. The talks will seek a deeper understanding of both the opportunities and challenges that AI and new technologies can offer the defence field. The meeting will be attended by representatives from NATO, the UN and a group of experts (Global Tech Panel) invited by High Representative Mogherini.

The defence ministers' discussion in Helsinki will cover questions such as how AI can be harnessed for developing EU defence and how to ensure that the EU stays abreast of global technological developments. The ministers will also address ethical and legal questions related to digitalisation and AI.

EU defence cooperation consists of strengthening the defence of its member states by exploiting EU instruments. In the past few years, defence cooperation has become more comprehensive and covers a wider range of areas. The founding of a European Defence Fund can help improve industrial competitiveness, for example. In practical terms, it makes it easier to move of troops and equipment in Europe.

The EU is working in close collaboration with its partners to develop defence cooperation. NATO and UN representatives will also be attending the Helsinki meeting.

"Defence cooperation has become more important in recent years. We need to examine it from many angles and with a view to the future too," says Kaikkonen.

In their first working session on Thursday, the defence ministers will discuss the impact of climate change on security and defence. This will be followed by talks on maritime safety and the day will end with discussion on hybrid threats together with the foreign ministers. The ministers will assess the preliminary results and experiences of the scenario-based discussions held in Helsinki in July. The aim of the discussions is find ways to strengthen resilience and build awareness of hybrid threats in the EU.